Origins Of The Indian Caste System 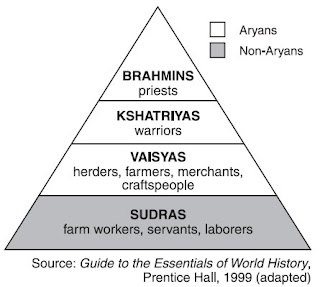 Referring to the article "Who are the 'Paraiyars', really?" by Universiti Sains Malaysia vice-chancellor Professor Tan Sri Dzulkifli Abdul Razak (NST, Feb 6),here's a really interesting take on the origins of the Indian caste system.
He shed new light on the "Paraiyars", after making references to a book by Abbe Dubois. It was a good attempt to explain the issue but some content are misleading ( please see below for the misinformation)
All those who had argued about this subject, whether Indians or non-Indians, have not explained it clearly enough for the nation to understand this issue of "Paraiyars". Many are not clear about the caste system where the word "pariah" is said to originate.
One would be surprised to know that the caste system does not exist in Hinduism. In Hinduism, there is a system known as the "varnashrama", which divides society into four natural groups -- Brahmana, Kshatriya,Vaishya and Shudra -- depending on individual characteristics and disposition.
Every human has certain tendencies by natural inclination and choice. These are divided into four divisions known as " varna " (colour). It does not relate to skin colour but to a person's aura or consciousness.

After reading a student's aura and his tendencies, the master would decide which job would suit him most, where it would allow the student to serve society in a harmonious way and not frustrate him.
A student is placed in the varnashrama of either the Brahmana also known as Brahmins (intellectuals, academics, priests), or Kshatriya (rulers, administrators, soldiers) or Vaishya (businessmen, farmers, bankers, those engaged in commerce) or Shudra (ordinary workers, those engaged in physical labour, dancers, singers).

It was never a condition that birth determines a student's division. This was a system of self-discovery and development in assisting a person to find his place in society, where he could contribute to it by doing a job in accordance to his nature.

This system is sanctioned by a book that no one commenting on the issue had referred to, namely the Bhagavad Gita, where Sri Krishna talks to the warrior Arjuna at the battlefield of Kurusethra.
It states: "According to the three modes of material nature and the work ascribed to them, the four divisions of human society were created by Me" (4.13).

"By following his qualities of work, every man can become perfect... By worship of the Lord, who is the source of all beings and who is all pervading, man can, in the performance of his own duty or occupation, attain perfection" (18.45-6).

Clearly, no one is forced into the work he dislikes. Neither is birth a criterion for determining the division he would enter for work purposes. The underlining principle in Hinduism is that work is worship and one is allowed to change the division one is in.
For example, if a soldier has had enough of battles and wants to become a priest, he will leave his Kshatriya division and enter the Brahmin division. It's as simple and flexible as that. This system allowed everyone to work according to his nature and bring happiness to himself and society. It was never meant to divide society according to materialistic divisions. The sole object was to unite people in a cooperative society in the service of God. Every individual in the divisions had equal rights.

From the above verses, there is no mention of "pariah". So what happened then?

As time went on, the varnashrama system was abused by the Brahmins, who made it a condition that those born of a parent who worked in a particular division would remain there. Switching from one division to another was not permitted. In that way, the Brahmins gained control over power and money.

This new condition was against the teachings of Hinduism. Some Brahmins and Kshatriyas opposed these new conditions. However, by this time, India was invaded. These invaders not only massacred people, but burnt down great libraries that contained most of the information regarding the varnashrama.

A new materialistic caste system was born. When the British arrived in India , they saw the system as an opportunity to divide society further to suit their interest and twisted it with a view of converting the Hindus.
The British then created another theory -- the Aryan theory -- which stated that European nomads came by chariots and conquered India and later composed the Vedas.

The Misinformation :-
1) Dzulkifli touched on the origin of the word Brahmin, but it was misleading. First, the Brahmins are not followers of Brahma. They, and all other Hindus, pray to the one supreme God known to them as "Brahman". Brahma and Brahman are different entities.

2 ) Second, he said the Aryan Brahmins carried out "conversion" and those who refused to convert were "cast out". This is misleading.

3 ) Scientifically speaking, there are no Aryan or Paraiyar races. The three primary races are Caucasians, Mongoloid and Negroid.Both the so-called "Aryan Brahmin" and "Paraiyars" are related branches of the Caucasian race, which is in the same Mediterranean sub-branch. Biologically, they are of the Caucasian race.

4) "Aryan", or its correct term "arya", was discovered in the Vedas of the Hindus. The term "arya" means noble or spiritual and it never meant a race of people. Those who followed the noble Vedic way of life or arya dharma may be termed as arya. It is a term of respect, something similar to a "datuk".

During the 19th century, many Europeans believed that they belonged to a superior race and their religion was the best. With the racial theory of man in vogue, they thought that the fair-skinned Indians were different from the dark-skinned Indians.

At that period, similarities were discovered in Sanskrit and the European languages. Therefore, they thought that since Sanskrit was related to their languages, it must have come from a white race and not the darker-skinned Indians (compared with the Europeans). It was a linguistic theory adopted by the British to hold power. They began interpreting the Vedas in the same racial manner. The forces of light against darkness were interpreted as white race against dark race.

Hence, their theory of an Aryan race from Europe that invaded India and gave them the Vedas. Terms were mistranslated to suit the British objective, which was to convert Hindus and to justify their rule.
Many archaeologists and researchers forwarded theories of the location of this Aryan homeland but it kept changing. An exact time period when the so-called Aryans came to India was never established.

This was also because, to the Europeans, the world was created at 9am on Oct 23, 4004 B.C. The great flood of Noah occurred in 2500B.C. So the philologist Max Muller and the rest gave the Aryan invasion date at 1500 B.C. In short, everything was mere speculation which, unfortunately, became part of Indian history.
New archaeological and scientific studies indicate that the Indus civilisation that preceded the Aryans, was Vedic and centred, not on the Indus , but on the banks of the Saraswati river and its language was Sanskrit.

The Rig Veda praises the Saraswati river in its hymns. The river dried up around 1900 B.C., which means Hinduism and those who composed the Rig Veda were there before 1900 B.C. and if the Aryans arrived in India about 1500 B.C., how did they know about this river and build their culture on its banks if the river did not exist any more?

The latest studies also indicate that the Indus sites were wiped out not by war or invasion but by a drought. The skeletons unearthed there showed no signs of injuries caused by war but by starvation or dehydration. This was the drought that wiped out civilisations in Sumeria and Mesopotamia .

Similarly, in Mohenjo-Daro , there was an absence of any signs of war, like extensive burning or weapons or any remains of armour-clad soldiers. Interestingly, evidence of temples and seals of Shiva and Vishnu exist which mean that the Vedic religion had been part of these people and not brought by any Aryan Brahmins.

In short, scholars are rejecting the invasion theory based on this emerging evidence.

Coming back to the "Paraiyars", they were indeed once land owners who lost their land, advisers to the kings, farmers, musicians, singers and members of the manual workforce who were suppressed by the British in the light of their divide-and-rule policy. They were exploited by the British and later, "Paraiyars" was mispronounced as "paria" just like Singapura became Singapore, Pulau Pinang became Penang, Mumbai became Bombay and orang utan became rang a teng.


With love and passion,
Amreish Siman
Posted by Amrriees Siman at 5:23 AM

Amrriees Siman
Welcome to my wonderful world!As a constantly learning and evolving being with immense passion to succeed as an international filmaker and a businessperson,i'm a visionary with an immense desire to live my life to the fullest and enriching the lives of those fellow beings i encounter along my journey.My quest is deeply spiritual and universal in nature.I'm a vivid dreamer with a quest to achieve my peak potential for the betterment of mankind as best as i could. You may join me or bless me as i thread through my awesome life journey of discovery and fulfillment with love and joy !;-)